My newest show is coming to Hong Kong and opening at the end of July. It was produced with the Italian Chamber of Commerce for Hong Kong and Macau and the production manager is Joni Griffin whom you've had read so much about. It opens on Wednesday at 8pm and closes on the Sunday matinee at 3pm. Would love to have all my blog readers attend! It is a great show that talks about hunger issues, middle class rebellion, working hard and barely getting by in hard economic times. Very poignant for today's society despite the fact it was written in the seventies. It was written by Nobel Prize winning author, Dario Fo who won his prize for projecting the ancient clown into modern politics without losing any of the gags for sake of political message. He makes us laugh and he makes us think. 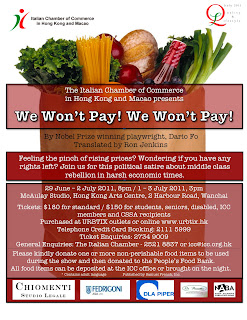 Meaghan
Purpose of this blog is to give a voice to the English speaking theatre community in HK, review productions, promote shows and talk about my adventures as a struggling artist. Recently made editor of HK's first online magazine for theatre. More details to come!